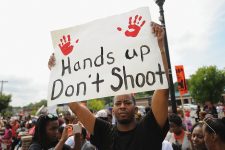 Join Rabbi Susan Talve as she discusses Black/Jewish community relations. She has an interesting and unique perspective to share with us in the wake of Michael Brown’s killing by white police officers in 2014 in Ferguson, MO and beyond. Rabbi Talve has been actively involved in ongoing non-violent protests.

Members see Weekly Calendar or Members side of the website for ZOOM pre-registration link.

Rabbi Susan Talve is the founding rabbi of Central Reform Congregation, the only Jewish congregation located within the City limits of St. Louis. Resisting white flight, she and her congregation are on the front line of fighting the racism and poverty plaguing the urban center.  Rabbi Talve leads her congregation in promoting radical inclusivity by developing ongoing relationships with African-American and Muslim congregations, and by fostering civil liberties for the LGBTQ community.