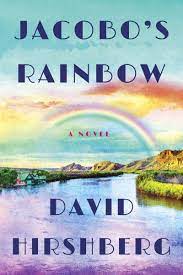 Join us as David Hirshberg (a Westchester resident) reads from and answers questions about his recently published literary novel Jacobo’s Rainbow, an historical literary novel set primarily in the nineteen sixties during the convulsive period of the student protest movements and the Vietnam War. It focuses on the issue of being an outsider – the “other” – an altogether common circumstance that resonates with readers in today’s America. Written from a Jewish perspective, it speaks to universal truths that affect us all.

“A beautiful novel set in the past but perfectly, scarily, relevant to our current moment.”
Gary Shteyngart, best-selling author of Absurdistan, Super Sad True Love Story, Lake Success, and The Russian Debutante’s Handbook.

This event will take place via Zoom. Link to follow.

David Hirshberg is the author of the multiple-award-winning novels My Mother’s Son, published in 2018 and Jacobo’s Rainbow, published in 2021, and has also written four short stories, one of which has won a Hackney Award.

He writes under a pseudonym, having adopted the first name of his father-in-law and the last name of his maternal grandfather as a tribute to their impact on his life.

Hirshberg holds an undergraduate degree from Dartmouth College and a master’s degree from the University of Pennsylvania. He also has a certificate from a two-year course at the Jewish Theological Seminary. He is an active member of Westchester Reform Temple in Scarsdale and lives with his wife and two setters in Bedford.